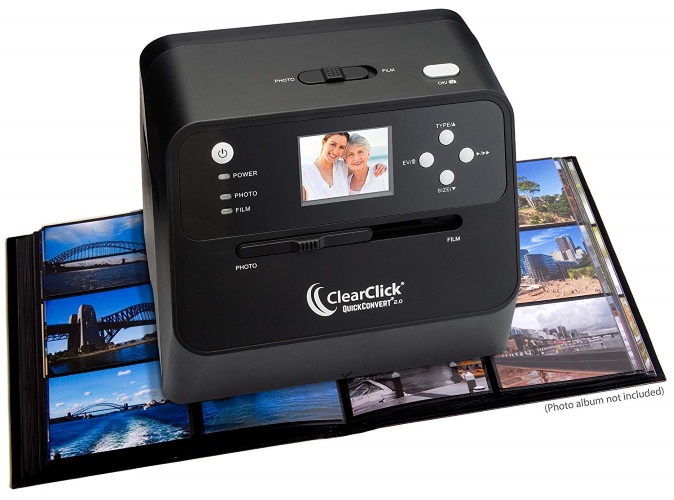 A film scanner is a device made for the purpose of scanning photographic films into a computer directly without the use of an intermediate printmaking. Film scanners have a lot of advantages over flatbed scanners in scanning prints of any size.

Using a scanner, the photographer is able to control the cropping and aspect ratio from the original image that has not been tampered with on the film; several film scanners have special software and hardware features that make it possible to remove film grain and scratches and also to improve color reproduction from the film.

If you’re looking to buy a film scanner, here’s our selection of the 10 best film scanners you should consider. 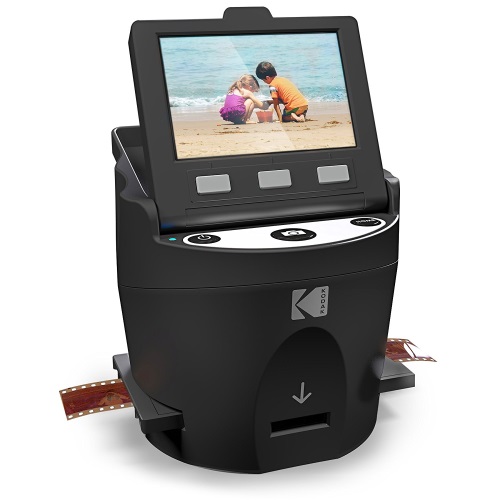 The KODAK SCANZA Digital Film and Slide Scanner is one film scanner that has quite a number of exciting functions. This Digital Film Scanner also makes it easier to relive the past, as simple as scanning, saving and sharing the image of the memories. The film scanner is able to convert film to JPEG format.

It is also able to digitize and optimize several antiquated films of different lengths of negative including the 35mm, 126, 110, 8mm and the Super 8 negatives, enabling the transfer of images to any device be it Mac or PC for storage, editing, printing and sharing.

It has large and bright 3.5 inches TFT LCD, which is a built-in high definition color display that functions in adjusting the brightness and convenience tilt.

Several adapters and film inserts for fast and flexible operation with the inclusion of cables and extras are also present as well as an intuitive user interface with an helpful tray and insert directory, along with an easily editable image RGB, resolution and so on. 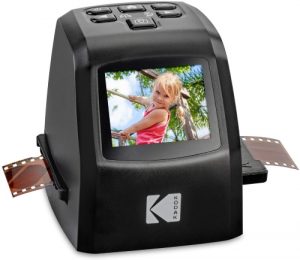 The KODAK Mini Digital Scanner is a film scanner that is capable of converting slides and negatives to digital files in about three easy steps. These steps include the following:

Each slide or negative is going to appear as a photo on the 2.4″ color TFT LCD screen, to scan these images, you need to click on the scan button. Each of the photos however take seconds to scan and get saved in digital format (JPEG format) on the SD card that comes with the film scanner. You also have the ability to edit the images before scanning.

You can then transfer the photos to your PC or Mac or other external storage devices on which you desire to save it. 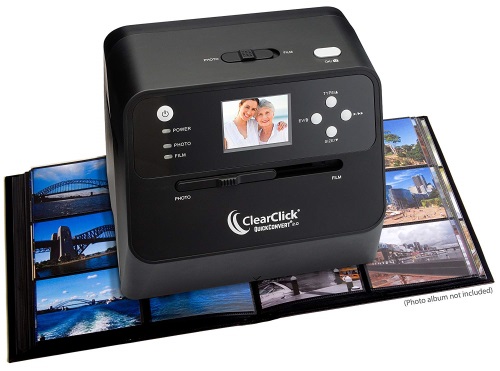 The ClearClick QuickConvert 2.0 is a film scanner that does not require the use of a computer for it to scan. This makes it super easy and convenient to set up and use. So, in just minutes, you can have your scanner set up and ready to start turning your photos, negatives and slides into digital form in just minutes.

This scanner also comes with a rechargeable battery which makes the device extremely portable.

This scanner works with photos that are four inches by six inches and smaller, slides of 35mm and negatives of 35mm as well as those of 110/126.

The resulting digital form is saved on the SD card with a high quality resolution of 14 megapixels.

The following come along with the scanner: 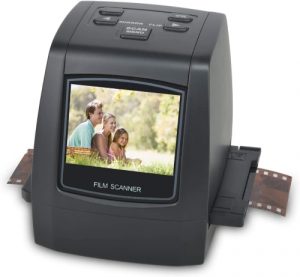 This film scanner is able to convert 35mm/135, 110, Super 8 and 126 KPK films, slides and negatives into digital format in an extremely short time.

It is stand-alone and does not require any computer to function. You can however transfer the digital image of the scanned items (in their high resolution) to your computer, tablet, smartphone and laptop. 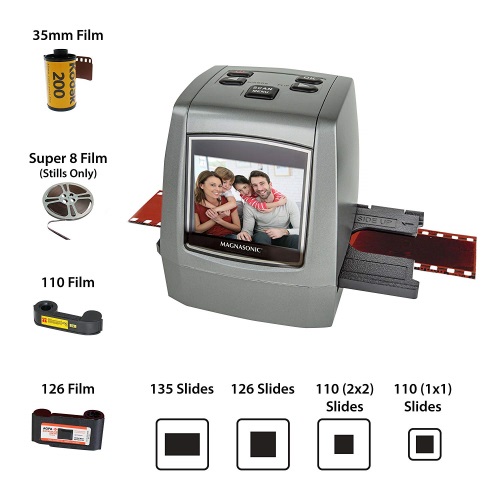 This Film Scanner produces digital images of excellent qualities under seconds. It can also fine tune photos on the built-in, full color LCD screen without you having to learn the use of any complicated image editing software.

It is able to scan and convert 35mm negatives, 126KPK, 135, 110, Super 8 films, slides and negatives into excellent quality digital files.

The device also has a built-in memory of about 128MB which can save up to 100 photos, it can also accommodate an external SD card with memory of up to 32GB to save more photos onto the scanner.

This scanner has no need for a computer as you can control the brightness, rotation and other functions directly on the film scanner. 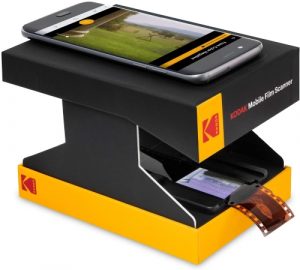 Bring your old memories to life with the KODAK Mobile Film Scanner. This tiny lightweight scanner allows you to scan and convert all your 35mm black & white and color negative & positive film strips with incredible ease and efficiency just using your smartphone or tablets.

The scanner comes with all in one companion app that lets you control everything on your smartphone screen. You can scan, convert, edit and share straight from your smartphone or tablet. 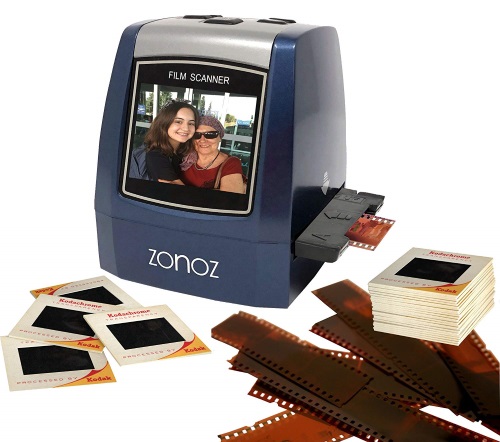 The Zonoz FS-3 film and slide converter scanner is an amazing device that can be used to scan and arrange your old films and slides. The scanner is home to an excellent image sensor that captures and converts every detail and color in every inch of the image in your slide or film into digital form.

The Zonoz FS-3 has the following features: 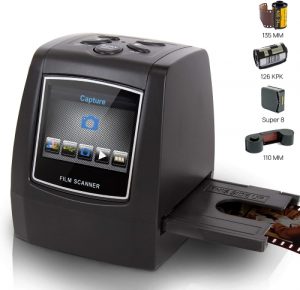 With built-in 2.4 inches digital LCD display for viewing images instantly, there is no need for a computer, the output resolution of this film scanner is 22MP and it saves directly into a pre-inserted SD card. It also has a 14MP image sensor that helps achieve a clear and detailed scan of old films and slides. The scanner is able to scan 35mm slides and negatives, 126KPK, 135, 110 and Super-8 film stills.

There is no need whatsoever to bother with adjusting exposure and the color balance of the scanned images as this film scanner automatically adjusts them for you. It also connects easily with your computer making it easy to forward the scanned images in the SD card to the computer. 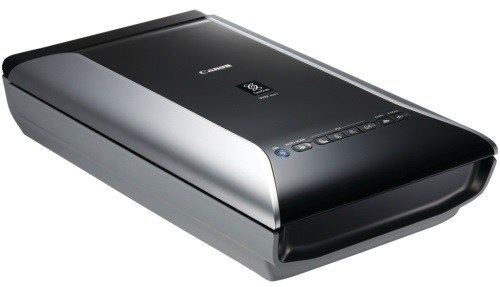 The canon canoscan film scanner is able to scan everything from photos, 35mm films, to documents and other prints with superb quality.

Using this scanner for the scanning of documents and photos as well as their organization is simple such that the best result can be achieved.

This device also has a built-in retouching technology known as FARE (Film Automatic Retouching Enhancement) Level 3 whose function is to automatically correct the photos and films by removing several of the dust and scratches while also restoring the colors of the images.

Canon canoscan film scanner offers a considerably low power consumption in its use of super-efficient white LEDs. It also has zero warm-up time as you have no need to wait while it loads up, you just turn it on and it is ready to go to work. 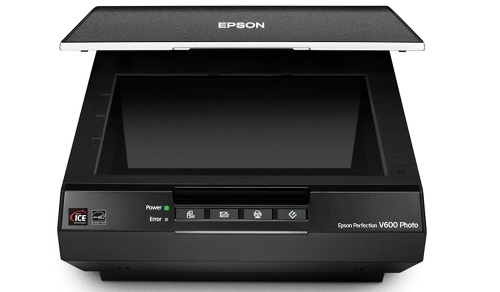 The Epsom perfection V600 color photo, image, negative, document and film scanner is a corded scanner that creates extraordinary enlargements from the film – 6400 x 9600 dpi for enlargements up to 17″ x 22″.

It also removes the appearance of dust, scratches and any form of damage like tears or creases from damaged photos.