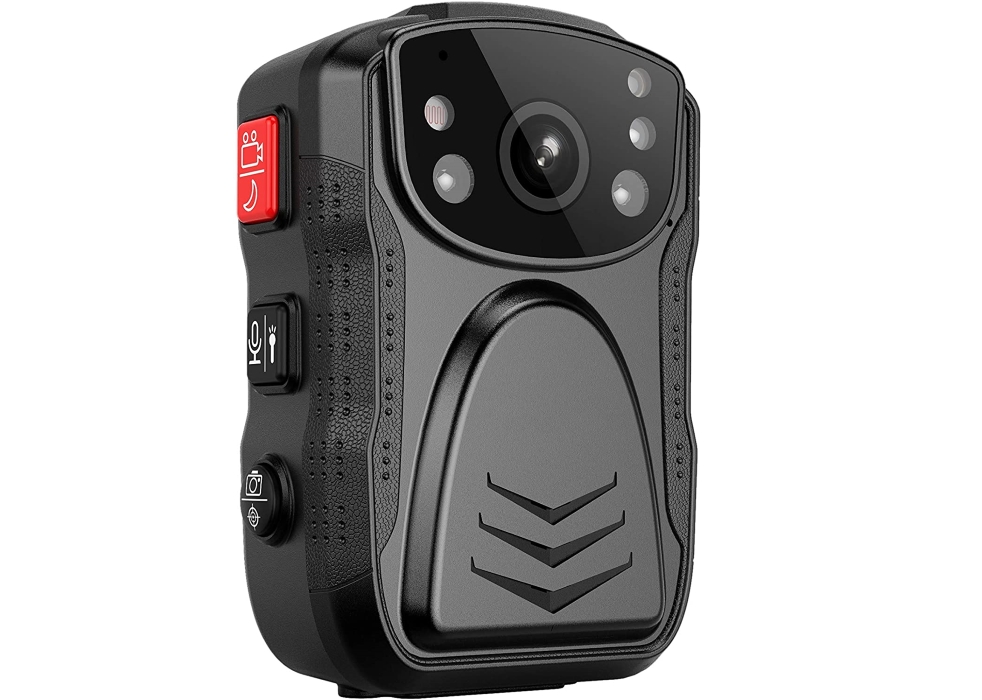 Wearable body cameras were initially rolled out as the ultimate spy kits but over time, their use has grown in diversity and they are currently ubiquitous in human lives. Their applicability ranges from surveillance to policing and personal security, a reason why their popularity keeps growing by the day. 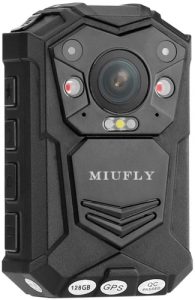 This is a body worn camera containing 128 GB of internal storage space, but users should not be duped into believing that this device is used for policing purposes only. Common folks have applied this system in their professional work as well, collecting information in different acts of espionage. It comes equipped with an amazing 1296P high definition resolution, enhancing the quality of footage that one expects in the field. The 2-inches LCD screen which characterizes the camera similarly allows users to play and replay recorded video content at any given moment.

In addition, this camera comes equipped with a highly-rated 2900mAh battery capacity, which gives room for at least 10 hours of video recording. It is a nifty system which has the provision of adding a user ID, watermarks and even date stamps to enhance the quality of content. With the option of adding passwords to the content, this is one camera with the capability of protecting all forms of content, whether one is speaking of pictures or video footage. Besides being waterproof, the camera is also enabled with night vision abilities, making it convenient for the price range. 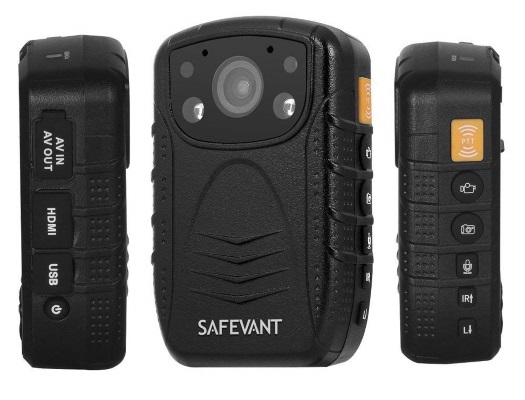 Despite the fact that this camera is mainly built to serve policing roles, Safevant body camera is designed in such a way that it can offer indoor and outdoor recording functionalities, a reason why it can be used for personal reasons as well. The video quality resolutions range up to 1926P but it is mostly loved because it offers four different types of video resolutions. It is solidly-designed, featuring a 140-degrees angle of view that gives room for data collection from a large area. As a result of the 16X digital zoom feature that it packs, this camera not only allows users to collect content from a larger area but also record very clear video footage.

It is one of the simplest cameras to use, whereby the processes of recording videos, audio content and taking photographs can be achieved with the help of a single button. As a result of its size and portability, it has been described as one of the best cameras to wear around. It has a 2.0-inches LCD display, allowing you to check all pre-recorded video footage instantly. The 3000mAh battery power is only associated with high-end body cameras and Safevant brings it into effect, to give users at least 8 hours of continuous recording. Additional features from the pack include: 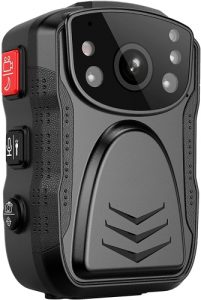 PatrolMaster Law Enforcement Body Camera is not only versatile but also multi-functional in nature, combining the able capabilities of a voice recorder, a camcorder and a camera. Perhaps this explains why it has been used as the perfect aid for police officers and security guards whenever they wish to offer video evidence in support of their work. It comes with 64GB internal memory, and a very powerful battery, which is capable of taking at least 18 hours 1080p footage, 20 hours 720p footage, 10000 images, and 10+ hours of audio recording on a full charge. Like most systems, this is the kind of camera which comes with a 2.0-inches LCD screen. Together with the in-built speaker, you have the liberty of playing all the recorded videos to enhance the security of your home or commercial premise.

Thanks to the connectivity features that the camera contains, all the recorded content can be shared with ease using a USB cable. 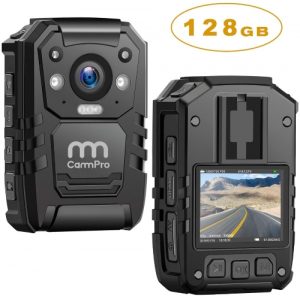 CammPro Portable Police Body Camera is a full-featured body camera for law enforcement to record their interactions with the public or gather video evidence at crime scenes. It is one of the forces to reckon with when it comes to body worn cameras, a reason why it is mostly used by police officers. With the 1296P video recording, one should not necessarily compromise the quality of the video footage. The camera comes equipped with High-Intensity infrared LEDs that captures clear footage up to 50 feet away in pitch-black darkness.

The camera also features 2 inch LCD screen and the built-in 128GB internal memory ensures sufficient space to store all recorded videos. The powerful 3500mAh battery lets you record footage for up to 11 hours in a row. 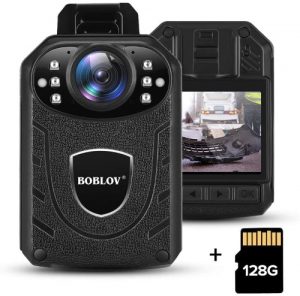 The BOBLOV 1296P Body Wearable Camera features a wide angle lens and an amazing 140 degrees angle of view which enables it to capture a lot of footage from the surrounding. The angle of view and resolution are also set up in a way that the package is capable of capturing 1296P video recordings. The camera supports up to 128 GB memory card and built-in 2850mAh battery power boasts up to of 10 hours of continuous recording time. It comes equipped with two stable 360° rotation clips and fits to clip on your shirt or belt.

Typically, videos are recorded using short clips which are (5/10/15/20/30 minutes) long and this makes it possible to capture multiple fragments of video and audio content, especially in an environment where users wish to collect multiple pieces of evidence without compromising their identity. 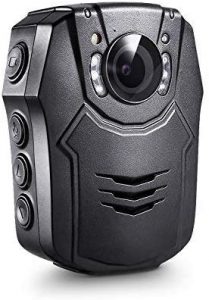 This multifunctional recorder is relatively more expensive compared to other brands in the industry but it offers ultimate functionality. It comes with the true HD resolution, featuring 1080P recording, with four different resolution choices. Angle of view here is 150 degrees, which is wide enough to take photos and collect video footage.

It is also one of the easiest body cameras to operate, whereby one can shift between photo taking, video recording, audio recording and infrared light by touching a single button. It can be worn within shirt pockets, emerging as the best concealable body camera. Owing to the high-intensity infrared LEDS, the camera is capable of recording clear video footage to a distance of 23 feet. Other advantages associated with the pack include: 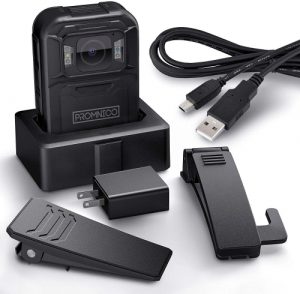 This body camera features a 1440P super high definition resolution and comes with a built-in memory card of 32 GB. The body camera doesn’t support internal and external memory card which can be a deal breaker for some.

It also comes with 4 infrared LED technology, ensuring that your home or area of interest is monitored all through the night. The body camera also provides geolocation information of the footage taken. Some of the features which make it unique include: 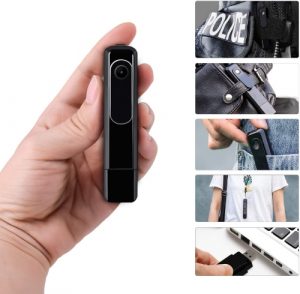 This body worn camera is the perfect security gadget for personal security and police surveillance. The body camera can be worn on your clothes, keep in your pocket, wear around your neck with lanyard or practically anywhere discreetly.

This body worn camera has a maximum memory support of 128GB, which allows it to record audio, video content and images. Apart from the 1080P video resolution, the camera also offers 960P photo mode. The built-in lithium battery 240mAh gives up to 3 hrs working time.

This camera assumes the size of a thumb, making it easy to conceal the system in any setting. Thanks to the USB charging option, the camera can work even in areas where power is a major concern. Other features from the package include: 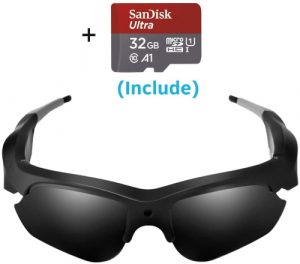 MingSung Camera Glasses is a mini video recorder camera in the shape of Eyeglasses that helps you capture HD video recording wherever you are without any trouble. The Eyeglasses houses a mini hidden camera, carefully-placed at the bridge between the lenses, ensuring that it is not easily noticeable. The camera features Full HD 1920x1080P resolution ensuring that the footage recorded is of the highest quality. 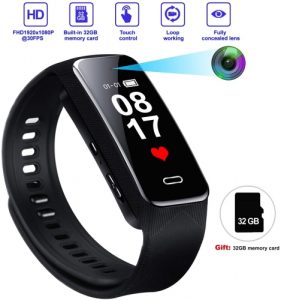 Video taking has never been easier but when it comes to LTMADE Smart Wristband Camera, the 1920X1080P resolution ensures that the footage recorded is of the highest quality. It has one of the carefully-shielded lens, a reason why it is not noticeable by the naked eye. Besides, it takes the shape of a wristband, with a mini hidden video camera that helps you capture HD video wherever you are without any trouble.

In a word, wearable cameras have been used for a long time to capture the most interesting moments in a person’s life but their use is evolving even further as they reduce in stature and improve on technical features. Body wearable cameras are particularly important in the collection of information with a great deal of anonymity and this has served millions of professionals in different sectors.