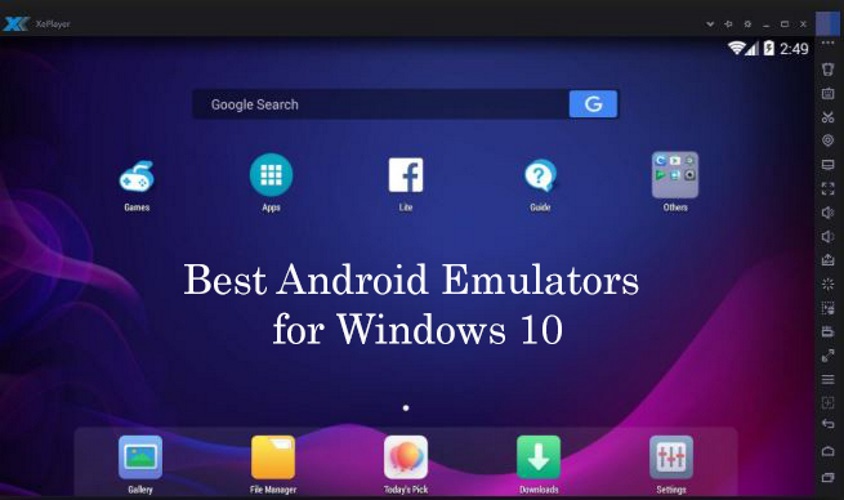 The emulator makes available almost every function found in a real Android device. Functions like receiving phone calls and text messages, network speed checking, playing Android games, live streaming, and so much more can be simulated using the Android emulator. The Android emulators give the Android feeling the same way an Android phone would, thereby making it a handy tool.

The following are the top 10 Android emulators for Windows 10.

It supports joystick controllers. This means that you can connect your gamepad to play various Android games with the NOX app player. It also supports GPS emulation. The NOX app player allows you to emulate GPS on your PC. The GPS emulation feature allows you to fake your GPS location which can make the playing experience of augmented reality games like Pokemon Go easier. The NOX app player also lets you specify the various Android specifications of your Android emulator from the processor type to the size of the RAM that the emulator uses.

Bluestacks Android emulator supports live streaming which makes it possible to stream your games directly from your PC.

It comes with a sample game that allows you to see how different games work. Bluestacks offers a very nice gaming experience. Bluestacks is FREE!!

The Xe player is a new Android emulator built specially for Windows 10. It possesses similar characteristics to the NOX app player like the feature that allows you to use joystick controller to play Android games.

The Xe player also has the one click root feature that simulates rooting on Android devices. The Xe player can run on low specification systems via the Direct X mode which makes the emulator very useful and compatible with various PCs.

MEmu is one of the very few Android emulators that simulates Android devices running on 5.0 (Lollipop) for PC. MEmu works very well on Windows 10, Windows 7 and Windows 8.1. The MEmu Android emulator can also be used to run the Android version 4.4 (KitKat).

Various features found in the MEmu Android emulator include Touch support that makes you play Android games with your keyboard or mouse as well as an external gamepad.

Andy OS Android emulator is a well-known Android emulator used for the PCs with very low configurations, and it was formerly known as Andyroid Android Emulator. You need not worry about having a dedicated graphics card or a nice GPU before you can use the MEmu Android emulator.

The Andy OS is based on the Oracle Virtual Box which allows any PC in use to run faster thereby making sure it does not slow down the PC. It also allows you to play games on big screens with your mobile phone serving as the controller.

Remix OS Player is created by the company in charge of the famous Remix Operating System. It allows you to boot as well as use the Android OS as a default operating system just the way Windows boots on PCs and laptops.

The Remix OS player has a huge installation size and being created by a company with an already existing Android Operating system gives it a lot of functionalities and noticeable features. A very wonderful feature of this Android emulator is that it is free of all bugs.

The most interesting thing about the Remix OS Player is that it is the only Android emulator using Android 6.0 (Marshmallow).

The KO player is one of the best Android emulators used for gaming due to its gamer-friendly interface. Using the gaming controls of the Android emulator is easy. The KO Player also supports external game controller, GPS emulation, and live streaming of gameplay directly from the KO Player.

The KO Player is the best option for Android gamers, seeking to emulate Android games on PC.

The Droid 4x is an excellent Android emulator when it comes to Windows tablet version. It comes with touch support on your tablet that will make you feel like you are using an Android tablet, even if you are holding a windows tablet physically. This makes it possible to run two different operating systems (Windows and Android) comfortably on one device. The Droid 4x is built to stabilize the different functionalities of the Android emulator and a lag-free operation.

The Android Studio emulator is an android emulator for PC developed by Android Studio for Google. The Android emulator simulates almost every Android device available on your PC which gives you the flexibility of testing your various applications across different devices virtually. It provides a large number of features which can be found on your physical Android devices. The Android studio emulator is preinstalled with different configurations for Android phones and Android TV.

Be you a gamer, developer, and Android professional, or just someone seeking the Android experience on your PC, there is a lot to choose from depending on what type of applications you want to run on your Android emulator.